In conventional usage, metadata refers to data that describes or characterizes a digital object, whether internal or external to the object itself. It is often subdivided into categories such as descriptive, administrative, and structural. Since virtually any metadata element can be seen as having value for preservation purposes, preservation metadata is not so much a separate category as an amalgam of other types. However, preservation metadata may include unique elements and/or finer detail than metadata used for other purposes. 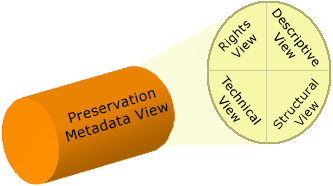 A graphical representation of preservation metadata's umbrella view of other metadata types.

OAIS provides a general framework for preservation metadata. Several pilot studies around the world have built on that framework to identify and specify metadata for digital preservation. Each took a slightly different approach and developed different metadata element specifications. The OCLC/RLG Working Group on Preservation Metadata (see their report) and its successor Preservation Metadata Implementation Strategies (PREMIS) brought together experts from those initiatives and others to reconcile and consolidate the previous work. The versions of the data dictionary and other PREMIS results are maintained by the Library of Congress.